How to Redesign Your Report Card Template 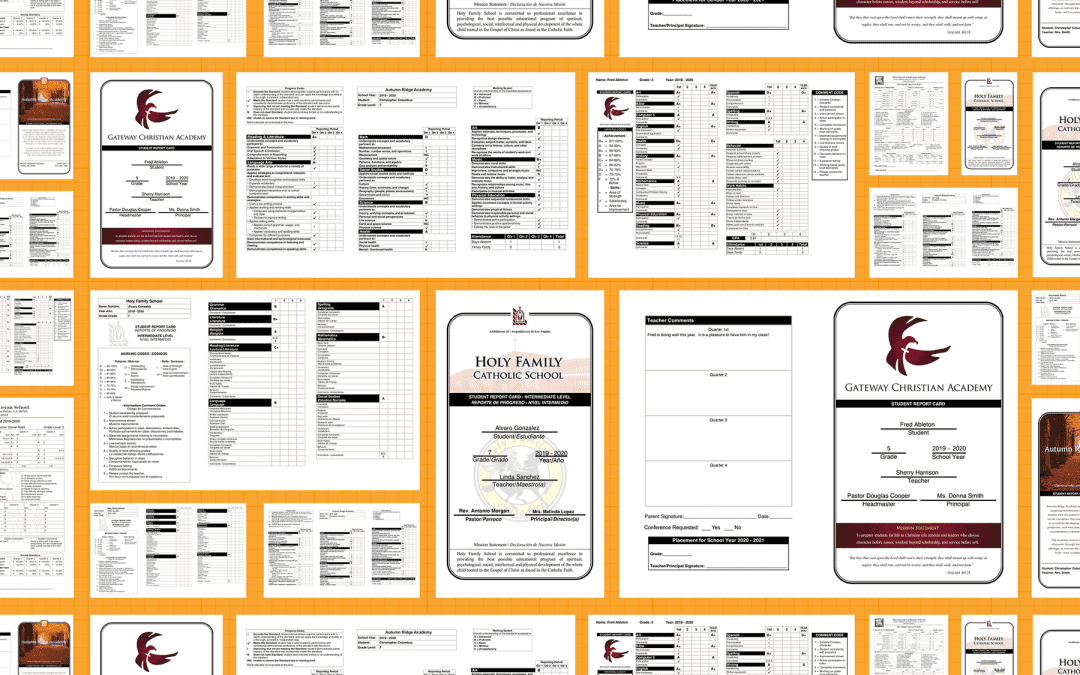 Today. Right now. This moment might just be the perfect time to rethink your school’s report cards. Maybe you’re looking for new frames of reference that convey students’ performance in areas of work habits or specific skill sets in addition to core subjects like science and math. Or perhaps you want a more user-friendly aesthetic that allows parents to check their child’s progression using grade-level standards and expectations. If you find that your school’s current report card template isn’t making the grade, then we’ve got some creative solutions for you.

What Elements Make Up A Report Card?

In addition to reporting students’ academic achievements, report cards also reflect the work habits, behaviors, and soft skills developed within a specific time frame. These elements serve as progressive benchmarks that allow educators and families to communicate the intellectual and moral development of their students, and these are typically represented through a combination of scales and commentary.

In the traditional grading system, letter grades are given for core subjects based on assessments like quizzes, tests, projects, homework, and more. All these assessments are scored and put into the gradebook and are averaged into a student’s letter grade. In this system, it’s the teacher who combines assessments and generates the grade. This method is quite user-friendly and familiar to all of us.

Defined as “an innovation in education that focuses on learning and helps increase achievement,” standards-based grading takes those same quizzes, tests, and projects and views them individually, highlighting specific areas where a child needs more support. Most systems base their scores on a 0 to 4 or 5 scale, in which skills progression and demonstration of mastery are reflected. These scores are directly connected to a school’s standard, which details in words what that number means, i.e., their level of proficiency.

A grading scale allows you to set which letter grade will be awarded based on the percentage grade earned for term and yearly grades.
Grading scales typically use the traditional letter grades A, B, C, D, and F.

Additionally, improvement indicators (E = excellent, S = satisfactory, N = needs improvement, and U = unsatisfactory), or Pass/Fail scales are used along with letter grades for classes that aren’t necessarily factored into a student’s GPA but that show progress.

The grade point average, or GPA, allows schools to convert letter grades into a numerical scale. The grades in all classes are averaged together to arrive at one cumulative grade, which is then converted into a GPA. Traditionally, GPA scales range from 0.0 to 4.0. Plus and minus grades affect the GPA calculation at most schools. A plus grade is worth an extra third of an extra grade point, and a minus grade is worth a third of a grade point less (e.g., a B+ counts for 3.33, with a B- counting for 2.67).

GPAs can go higher than 4.0 if a weighted scale is used, which accounts for students who take more challenging coursework, such as AP or Honors classes. Weighted scales are typically district-specific.

One final note on GPA is that it’s used as a measure of engagement in learning and willingness to work hard to meet academic standards and expand knowledge. It focuses on academic strengths and weaknesses and the ability to challenge oneself. GPA takes on a critical role in the application process at most schools.

We mentioned earlier that there might be classes that students take but that aren’t factored into their GPAs. Think of your freshman year ceramics class. If art wasn’t your major, you likely received a “Pass” (along with some misshapen mug you gifted to your father). Classes using improvement indicators (E, S, N, U) or Pass/Fail scales may have no percentage equivalent and can include courses such as art, music, and physical education.

For classes where letter grades are given, those grades can be converted into percentage equivalents. Here’s a typical scale that many schools use:

Should Grades be Rounded?

Although each school sets its own rules, there is a general consensus that the best practice for rounding percentages is to round up to the nearest integer, up for .5-9, down for .4-0. This would mean that if a student’s percentage grade were 92.7%, then this would be reflected as a cool 93%. This would not change the student’s letter grade of A.

How to Show Soft Skills On Report Cards

Other key components of reporting elements are soft skills, including the work habits, effort, and behaviors of students. Categories for both older and younger students encompass their social skills, abilities related to self-management, academic soft skills such as listening to directions, and approaches to learning such as an openness to engage in a challenging task. Some examples from school report cards are:

As you can see, these categories tend to overlap no matter the age! Progress of soft skills can be reflected on report cards using:

Aesthetics often take a backseat to the more robust and informative elements of report cards, but aesthetics are powerful! How your school chooses to present report cards shows that your institution is professional and intentional in terms of branding and allows for ease of navigation for both teachers and parents. It’s a reflection of the school as an institution and the design and flow matter.

Let’s face it: your branding is a big deal. Both the name and image of the school are “the face” to the outside world, and nailing that first impression is crucial. A school’s logo, watermark, and illustrious mission statement promote the values of the school. Religious text verses, accreditation seals, and affiliations advocate the ideals and ethics of the school. All of these components cohesively communicate the uniqueness of your school, and these elements should absolutely be present on your report cards.

The ultimate goal of layout design is that information is made easy to understand. Positioning subjects side by side, for example, allows you to convey their relationship without words. Layouts also allow you to communicate grade scale legends, whether standards-based scores or progress indicators, with their corresponding subjects.
If a report card layout isn’t thoughtfully designed, you risk jumbled or squeezed information, frustrating and confusing parents. This translates into parents complaining–perhaps about the school. However, a layout that presents information using clean, well-executed positioning allows for a pleasant user experience, which can also translate into parents talking about the school–this time positively!

Whatever scales your school decides to go with, you’ve got options. Start by downloading a complete collection of thoughtfully designed report card examples. There are options from traditional to modern, including advanced features that allow schools to set up custom classes, custom grade scales, numbered and term comments, attendance, behavior, work habits, bilingual format, and much more.